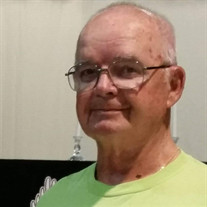 Elmer Lloyd “Rick” Reikard, 81, of Delmar, passed away on Friday, February 15, 2019 at PRMC in Salisbury, Maryland. He was born on November 12, 1937 in Lancaster, Pennsylvania, a son of the late Elmer and Anna Reikard. Rick was a US Army veteran and proudly served his country in the late 1950’s. He spent his career working as a foreman for Hoffman-LaRoche for 30 years, then went to Triglia Transportation for a few years, and lastly worked in the vending department for 20 years at Pepsi. He was a lifetime member of the Delmar Fire Department, where he served in various capacities for over 50 years, and was an active member up until the past year. His hobbies included bowling, golf, and playing cards with his fire department family. He enjoyed spending time with the family and attending sporting events involving his children, grandchildren, and great grandchildren. For many years he enjoyed camping with friends at Treasure Beach Campground. He is survived by his wife, Brenda L. Reikard of Delmar; daughters, LuAnn Hampshire (Doug) and Jody Reikard (fiancé, Rob Johnson), all of Salisbury; grandchildren, Cathy Hampshire (Matt), Douglas Hampshire, Jr. (Jenn), Nicholas Hampshire (Samantha), and Makenzie Johnson; great grandchildren, Mallory Brimer (Phil), Mason Layne, Mitchel Layne, and Kaedyn Hampshire; a great-great granddaughter, Raelynn Alton; siblings, Nancy, Joyce, and Donald; several nieces and nephews; and his Delmar Fire Department family. In addition to his parents, he was preceded in death by an infant son, Jeffrey Reikard; a sister, Audrey; and his special dog “Jake.” A visitation for family and friends will be held from 6:00 to 8:00 pm at Short Funeral Home in Delmar on Monday, February 18, 2019 and from 9:00 to 10:00 am on Tuesday, February 19, 2019. The funeral service will begin at 10:00 am on Tuesday at the funeral home, and immediately following the service there will be a time of fellowship at the Delmar Fire Department. Pastor Gary Tulak and Assistant Pastor Doug Hampshire will officiate. In lieu of flowers, memorial contributions may be sent to Delmar Fire Department, PO Box 143, Delmar, DE 19940. Arrangements are in the care of Short Funeral Home in Delmar. Online condolences may be sent to the family by visiting www.shortfh.com.

The family of Elmer L. "Rick" Reikard created this Life Tributes page to make it easy to share your memories.

Send flowers to the Reikard family.