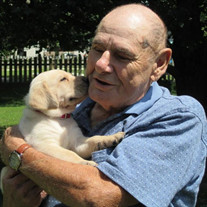 Edmund Seefried, Sr. of Delmar, DE departed this life on Saturday, June 15, 2019 at 1:33p.m. at his home surrounded by his girls. He was born on March 27, 1935 in Germany to the late Wilhelm and Martha Seefried. He came to the United States at the age of 17 with his family and arrived at Ellis Island on May 19, 1952. He met the love of his life, Irene Dennis, at Friehofers in Delmar. He was a route salesman “bread man” and she worked in the office. They were married on August 24, 1957 and together they enjoyed 36 years of marriage. He was a “bread man” until he retired at the age of 62 from Schmidt’s Baking Company. He went back to work at Schmidt’s in the thrift store in Seaford until it closed. He had a strong work ethic and a strong love for his family. He was a true gentleman, a man who believed in providing for and protecting his family and friends. Ed loved anything outdoors. He enjoyed gardening and landscaping. He loved to fish and enjoyed taking his dog for walks. He was a lifetime member of the Delmar Fire Dept. He was preceded in death by his parents, his loving wife Irene, his in-laws Vincent and Irma Dennis, his sister Emma and his brother Wilhelm “Bill” Seefried. He is survived by his children, Edmund Seefried, Jr., Salisbury, Irma J. Hill(Brian), Laurel, Doris A. Seefried, Delmar and Valerie I. Seefried, Delmar; his four legged son, Jackson Seefried; his grandchildren, Vincent J. Seefried, Salisbury, Chelsea I. Hill, Florida, and Shelby L. Hill, Laurel; his siblings, Hilda Seefried, Woldemar Seefried (Renate), Adolph Seefried, Lilli Seefried, John Seefried(Virginia) and Luke Seefried(Linda); his sister-in-law, Christine Seefried; and several nieces and nephews. He is now free of pain and in heaven with his wife. We know he gave her a big kiss when he saw her and they are celebrating. A private funeral service will be held on Wednesday June 19, 2019 at St. Stephen's Cemetery. No flowers please, donations may be made to Short Funeral Home for funeral costs. Arrangements are in the care of Short Funeral Home in Delmar. Online condolences may be sent to the family by visiting www.shortfh.com

Edmund Seefried, Sr. of Delmar, DE departed this life on Saturday, June 15, 2019 at 1:33p.m. at his home surrounded by his girls. He was born on March 27, 1935 in Germany to the late Wilhelm and Martha Seefried. He came to the United States... View Obituary & Service Information

The family of Edmund Seefried Sr. created this Life Tributes page to make it easy to share your memories.

Send flowers to the Seefried family.