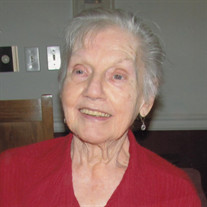 Dorothy M. Taylor, 88, of Delmar, passed away on Monday, February 19, 2018 at Salisbury Rehabilitation and Nursing Center. She was born on November 8, 1929 in Maryland Park, a daughter of the late George W. Effinger, Jr. and Thelma Cecilia (Thompson) Effinger. She was a graduate of the class of 1947 of Maryland Park High School. Dorothy was lovingly known as “Miss Dottie” at the North Salisbury McDonald’s, where she worked for several years and helped coordinate children’s birthday parties. She will be remembered as a loving mother and grandmother. Dorothy was also a member of Faith Baptist Church in Delmar. She is survived by her daughters, Debbie Thompson (Daniel) of Mineral Wells, Texas and Janet Martin (Jerry) of Delmar; grandchildren, Chris Thompson (Heather), Daniel Martin, Kelly Thomas (Chris), Matthew Martin, and Elizabeth Velazquez (Raul); great grandchildren, Nolan Thomas, Ailey Thomas, and Isabel Thompson; a brother, George Effinger, III of Ft. Walton Beach, FL; sisters, Cecilia Wiedemann of Cole Camp, Missouri, Naomi Guthrie of Lottsburg, VA, and Patricia Buscher of Glen Isle, MD; and several nieces and nephews. In addition to her parents, she was preceded in death by her husband, James P. Taylor who passed in 1991; and a brother, Francis Effinger. A visitation for family and friends will be held at Short Funeral Home in Delmar from 7:00 pm to 8:30 pm on Monday, February 26, 2018 and from 11:00 am to noon on Tuesday, February 27, 2018. A funeral service will begin at 12:00 p.m. on Tuesday at the funeral home. Pastor Ken Johnson will officiate. Interment will follow the service in Springhill Memory Gardens in Hebron. A time of food and fellowship will follow at Faith Baptist Church on State Street in Delmar. In memory of Mrs. Taylor, contributions may be sent to Faith Baptist Church, 1207 E. State Street, Delmar, MD 21875 or to the American Cancer Society, by visiting www.cancer.org to donate online. Arrangements are in the care of Short Funeral Home in Delmar. Online condolences may be sent to the family by visiting www.shortfh.com

Dorothy M. Taylor, 88, of Delmar, passed away on Monday, February 19, 2018 at Salisbury Rehabilitation and Nursing Center. She was born on November 8, 1929 in Maryland Park, a daughter of the late George W. Effinger, Jr. and Thelma Cecilia (Thompson)... View Obituary & Service Information

The family of Dorothy M. Taylor created this Life Tributes page to make it easy to share your memories.

Dorothy M. Taylor, 88, of Delmar, passed away on Monday, February...

Send flowers to the Taylor family.