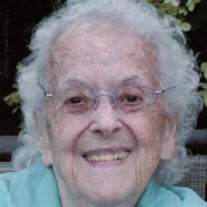 Donna Jane Linn Hess of Galestown, MD, daughter of the late Harold V. and Bunnie Ginter Linn was born on August, 9, 1925 in Emlenton, Venango County, PA. She departed this life on March 31, 2021 at her daughter’s home with family present. She was a graduate of Emlenton High School and Franklin Commercial College, Franklin, PA. She worked at Polk State School, Polk, PA as a medical staff secretary. On October 18, 1947 she married Richard P. Hess and moved to Knox, RD, PA, working as a bookkeeper for Clarion Motor Co., Clarion, PA. She and her husband lived in State College, PA while he attended Penn State University and after his graduation lived in Macungie, PA for several years. Job transfers eventually led them to the Eastern Shore of Maryland. After their four children were in school, she again entered the work force - for a time serving behind the refreshment counter at the old Wicomico Youth and Civic Center and then as a bookkeeper at Royal Crown Bottling Company. She retired in 1980 after 17 years as secretary to the Supervisor of Transportation, Wicomico County Public Schools. After retirement, she enjoyed her hobbies of needlework, doll collecting, genealogy research and keeping up with her family. She was a member of Christ Lutheran Church, Seaford, DE, the Mary Vining Chapter of the DAR, Seaford, DE, and the Emma Moomau Delmarva Doll Club. She was preceded in death by her parents, sister, Lucile Gordon, and her husband of 50 years, Richard P. Hess. She is survived by her daughter, Henrietta (J.C.) Parker of MD, her son, Richard Benjamin Hess of NC, her daughter, Victoria (Daniel) Palmer of MD and her daughter Elisabeth Hess of MD. She is also survived by seven grandchildren – Michael Parker (Tara Kelly) of Washington, D.C., Marcus (Chasta) Parker of SC, Christa (Vincent) Jones of NC, Jarrett Hess of NC, Justin of MD, Andrew of CA and Hannah Palmer (Mo Soltani) of PA; eight great-grandchildren - Aaron Parker, Zakkary Parker-Kelly, Jason (Regan) Cleary , Haedin and Jonas Cash, Bryanna, Angel and Madeline Jones. A private celebration will be held at a later date. She expressed a wish that any memorial or donation be sent to Christ Lutheran Church, 315 N. Shipley St., Seaford, DE 19973, Coastal Hospice, P.O. Box 1733, Salisbury MD 21802 or a place of your choosing. Arrangements are in the care of Short Funeral Home in Delmar. Online condolences may be sent to the family by visiting www.shortfh.com.

Donna Jane Linn Hess of Galestown, MD, daughter of the late Harold V. and Bunnie Ginter Linn was born on August, 9, 1925 in Emlenton, Venango County, PA. She departed this life on March 31, 2021 at her daughter&#8217;s home with family present. She... View Obituary & Service Information

The family of Donna Jane Linn Hess created this Life Tributes page to make it easy to share your memories.

Send flowers to the Hess family.