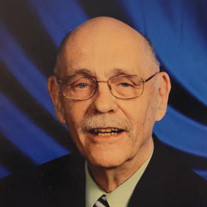 Donald A. Morris, 81, of Delmar, passed away peacefully on Thursday, December 9, 2021 at his home, surrounded by his loving family. He was born November 24, 1940 in Canandaigua, New York, the son of the late William and Rose Hamfeldt. Donald moved to Delmar during his junior high school years and graduated from Delmar High School with the class of 1958. Following graduation, he enlisted in the U.S. Air Force and proudly served his country from 1958 to 1962 while stationed at Dover AFB. Upon completion of his Air Force service he was employed at Bell Atlantic where he enjoyed many years of service working as a lineman and eventually moving into an Engineer Field position before his retirement. He was a long-time member of St. Stephen’s United Methodist Church in Delmar, where he held various leadership roles through the years. Donald stayed active in the Delmar community and was once part of the Delmar High School football team chain gang, the Walking Club and the Mason-Dixon Woodworkers. He was an accomplished woodworker and could build almost anything. He will be remembered for his love for family, church and for his wonderful sense of humor. He is survived by his wife of 62 years, Peggy Truitt Morris; daughter, Cathy Quay (Samuel) of Hollidaysburg, Pennsylvania; son, Scott Morris (Linda) of Delmar; grandchildren, Samantha and Shane Quay; great grandson, Aiden Carsten; sister, Rosalie Overbaugh of Colorado; and a sister-in-law, Penni Truitt. He is also survived by several nieces, nephews and cousins. In addition to his parents, he was preceded in death by brothers, David Morris and Charles “Chuck” Morris; and a grandson, Kane Carsten. A funeral service will be held on Sunday, December 12, 2021 at 2:00 p.m. at St. Stephen’s United Methodist Church in Delmar, where family and friends may call from 1:00 to 2:00. Interment will follow at St. Stephen’s Cemetery in Delmar. The Reverend Phyllis Walton will officiate.For those unable to attend please visit https://www.ststephensumc.com/ to view the service live. Memorial contributions may be made in his memory to St. Stephen’s United Methodist Church, 101 E State Street, Delmar, DE 19940 or Delaware Hospice, 100 Patriot’s Way, Milford, DE 19963. Arrangements are in the care of Short Funeral Home in Delmar. Online condolences may be sent to the family by visiting www.shortfh.com.

Donald A. Morris, 81, of Delmar, passed away peacefully on Thursday, December 9, 2021 at his home, surrounded by his loving family. He was born November 24, 1940 in Canandaigua, New York, the son of the late William and Rose Hamfeldt. Donald... View Obituary & Service Information

The family of Donald A. Morris created this Life Tributes page to make it easy to share your memories.

Donald A. Morris, 81, of Delmar, passed away peacefully on Thursday,...

Send flowers to the Morris family.