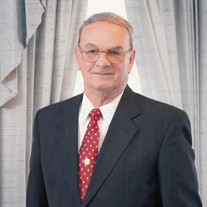 LAUREL- Donald F. Hoover, 88, of Laurel, passed away peacefully at his home on Wednesday, February 13, 2019, surrounded by his loving family. Don was born October 7, 1930 in his beloved Lancaster, Pennsylvania, one of six children of the late Harry W. Hoover and Marie A. (Krimmel) Hoover. At a young age of 17 he joined the U.S. Army and proudly served his country until 1955. In 1956 he joined the U.S. Air Force and made it into a career of 23 years and 6 months, retiring as Sr. Master Sgt. In 1972. He served during the Korean and Vietnam conflicts and got to see the world being stationed in far- away places he would have otherwise never seen like Alaska, France and Japan. After retirement he found work in funeral service and most recently worked many years at Short Funeral Home in Delmar and Laurel, a job he truly loved. He earned his 32nd degree in the Masonic Lodge, a 55 year member of Hope Lodge No. 4 and was a 25 year member of the Delaware Consistory. He attended Faith Baptist Church in Delmar. Don and his late wife, Ruth Ann, loved spending time together traveling the United States and were actually quite proud of the fact that they had traveled to all 50 states. Gatlinburg and Branson were some of his favorite destinations. He enjoyed working in his yard, talking religion or politics, spending time with family and his daily trips to Britt’s Dutch Inn in Laurel to have a late breakfast and chat with old friends. He will be remembered fondly as a loving husband, father, grandfather, brother and mentor, always willing to lend a hand to someone in need. Don’s last thank you goes to those who took care of his late wife Ruth Ann during her long battle with Alzheimer’s, especially Carol who also became her best friend. He is survived by daughters, Donna Hungerford and husband, Bobby of Dover, Micki Taylor and husband, Steve of Seaford and Dawn Ryan and husband, Mark of Laurel; grandchildren, Brian, Jeff, Shawn, Adam and Jacob; great grandchildren, Brandon, Kayla and Emily; a brother, Herbert W. “Bill” Hoover; sisters, Marianne R. Lynch and Claire Donnell; and several nieces and nephews. In addition to his parents, he was preceded in death by his beloved wife of 41 years, his “Ruthie”, Ruth Ann (Layfield) Hoover, who passed in 2017; a brother, Robert A. Hoover; and a sister, Geraldine Shane. A memorial service will be held on Tuesday, February 19, 2019 at 2:00 p.m. at Faith Baptist Church in Delmar. Interment will be private. In lieu of flowers, memorial contributions may be made in his memory to Vitas Healthcare, 100 Commerce Drive, Suite 202, Newark, DE 19713. Arrangements are in the care of Short Funeral Home in Delmar. Online condolences may be sent to the family by visiting www.shortfh.com.

LAUREL- Donald F. Hoover, 88, of Laurel, passed away peacefully at his home on Wednesday, February 13, 2019, surrounded by his loving family. Don was born October 7, 1930 in his beloved Lancaster, Pennsylvania, one of six children of the late... View Obituary & Service Information

The family of Donald F. Hoover created this Life Tributes page to make it easy to share your memories.

Send flowers to the Hoover family.