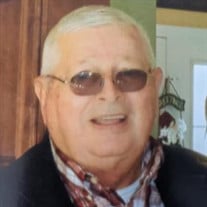 Donald “Don” Lee Engle, 90, of Salisbury passed away on Friday, July 9, 2021, at TidalHealth Peninsula Regional in Salisbury. He was born on August 10, 1930, in Federalsburg, Maryland, a son of the late Raymond and Elizabeth (Jester) Engle. Don proudly served his country in both the U.S. Navy and the U.S. Coast Guard during the Korean War. He developed a strong work ethic in his early years which followed him through a career as a correctional officer. He worked for the State of Maryland in both Jessup and Eastern Shore Correctional Institution, where he retired as a Captain. After retirement, Don continued to work as a truck driver for Delmarva Farms, Hudson Farms, Mountaire Farms and Donald Wheatley Trucking. He could fix anything and was happy tinkering on motors, loved to read, spend time outdoors, and especially enjoyed hunting and camping. He is survived by his wife of almost 49 years, Patsy Lee Engle; sons, Richard “Rick” Engle (Lori), Mark Engle, Donald “Donnie” Engle, and Craig Engle; grandchildren, Luke, Jacob and Emily Engle; and sisters-in-law, JoAnne Heddinger and Dawn Miller; brother-in-law, Bill Litz (Rose); several nieces and nephews; and his beloved chihuahua, “Teddy.” In addition to his parents, he was preceded in death by sisters, Patricia Coursey and Joy Cook. A funeral service will be held on Thursday, July 15, 2021 11:00 am. at Short Funeral Home in Delmar. A visitation for family and friends will be held one hour prior to the service. The Reverend Joe Barnes will officiate. Interment with military honors will be held on Friday, July 16, 2021 at 10:00 a.m. at the Eastern Shore Veterans Cemetery in Hurlock. In memory of Mr. Engle contributions may be sent to the Wicomico County Humane Society, 5130 Citation Drive, Salisbury, MD 21804. Arrangements are in the care of Short Funeral Home in Delmar. Online condolences may be sent to the family by visiting www.shortfh.com.

The family of Donald Lee Engle created this Life Tributes page to make it easy to share your memories.

Send flowers to the Engle family.