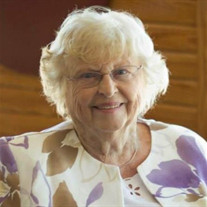 SEAFORD- Dollie “Eleanor” Elliott of Seaford, formerly of Delmar, passed away peacefully at the age of 95 on Thursday, January 31, 2019 at Acts Retirement Manor House in Seaford. She was born one of 11 children on May 27, 1923 in Vienna, Maryland, a daughter of the late Oscar and Nellie (Messick) English. She is survived by daughters, Donna Elliott Culver and her companion, Greg Maloney and Suzanne Elliott Killian; grandchildren, Laura Culver, Stacy Culver Kuczenski (Donald), and their son, Will, Sean Killian (April), and their children, Scott, Liam, Ryan and Maggie, and Katie Killian Baker (Beau) and their children, Kasey, Abby, Stosh and Ashley; a sister, Joan English Collins; a brother, William English; and many nieces and nephews. Eleanor cherished the memories of growing up on the family farm where she helped out until going to work at Dupont in Seaford until 1947. After that she spent several years working as a clerk at the Hecht Co. in Salisbury, from where she retired. In her later years, she attended Christ United Methodist Church in Salisbury. She and her husband Bill spent time quilting together and loved sharing their handmade quilts with family and friends. She also loved the outdoors and working in her garden and caring for her flowers. Eleanor was a people-person who enjoyed meeting friends during shopping trips and during traveling. She loved music and was a big fan of Vince Gill and George Jones music. In addition to her parents she was preceded in death by her beloved husband, William “Bill” Monroe Elliott, who passed in 1999; sisters, Marjorie English Smith and Dorothy English Scott; brothers, Russell, John, James, Robert, Norris and Calvin English, as well as sons-in-law, Howard Culver and John Killian. A funeral service will be held on Saturday, February 9, 2019 at 11:00 a.m. at Short Funeral Home in Delmar, where family and friends may call one hour prior to the service. The Reverend William Green will officiate. Interment will follow at St. Stephen’s Cemetery in Delmar. Arrangements are in the care of Short Funeral Home in Delmar. Online condolences may be sent to the family by visiting www.shortfh.com.

The family of Dollie E. Elliott created this Life Tributes page to make it easy to share your memories.