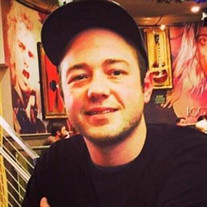 David Lee Jorden, Jr., 31, of Hebron, passed away suddenly on Monday, September 7, 2020 at his home. He was born July 11, 1989 in York, PA, a son of David Lee Jorden, Sr. and Brenda Jean (Maines) Jorden of Hebron. Dave graduated from Mardela High School with the class of 2007, where he played soccer, basketball and baseball and played in the marching band. One of his greatest accomplishments was achieving the rank of Eagle Scout in his younger days. He worked in the restaurant industry for the past 10 years at several places and recently started his own business offering cleaning services to residential and commercial customers. Dave was an avid sports fan who loved fantasy football, the Washington Redskins and Baltimore Orioles. Family and friends were important to David and hanging out, listening to music, dancing, Karaoke nights, playing video games or watching sports were his favorite times. He also loved to travel and Hawaii was one of his most memorable destinations. In addition to his parents, he is survived by brothers, Mike Jorden of Delmar and Ben Jorden and his wife, Brittany of Delmar, and their son, Hayden; uncles, Jim Maines, Jr. (Lisa) of NY, Jeff Maines (Lisa) of Conowingo, MD, and Scott Jorden of Salisbury; and cousins, Serena Sciarretta (Don) of NC, Melissa Wilson (TJ) of CO, Jimmy Maines, III (Anita) of NC and Scott Jorden of Salisbury. He is also survived by his special friend and longtime girlfriend, Maura Burton. He was preceded in death by an uncle and aunt, Bob and Cathy Maines. A visitation for family and friends will be held on Saturday, September 12, 2020 from 11:00 a.m. to 1:00 p.m. at Nelsons Memorial United Methodist Church, 100 Main St, Hebron, MD 21830, followed by a memorial service which begins at 1:00 p.m. The Reverend Rebecca Collison will officiate. In lieu of flowers memorial contributions can be made to HOPE, Inc. PO Box 5113, Salisbury, MD 21801. Arrangements are in the care of Short Funeral Home in Delmar. Online condolences may be sent to the family by visiting www.shortfh.com.

The family of David Lee Jorden Jr. created this Life Tributes page to make it easy to share your memories.

Send flowers to the Jorden family.