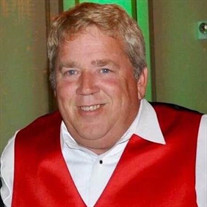 David Allen Insley, Jr., 56, of Delmar passed away peacefully at his home on Monday, June 11, 2018. He was born February 28, 1962 in Salisbury, a son of David Allen Insley, Sr. of Mardela Springs and the late Helen D. Insley, who passed on October 31, 2001. David was raised in Mardela Springs and graduated from Mardela High School with the class of 1980. After high school, he proudly served his country in the Maryland National Guard from 1981 to 1986. He also joined the Mardela Springs Volunteer Fire Company in the mid -1980s where earned his Cardiac Rescue Technician (ALS) certification, which led him to a career as a Firefighter/Paramedic with the Salisbury Fire Department in 1990. During his 27 years of Service in the city he held many positions, retiring in 2017 as a Captain. His true passion was scuba diving and his love of diving was instrumental in reorganizing The City's underwater search and rescue program under Salisbury Fire Department's management. He served as the Commander of the dive team for 13 years and even enjoyed helping train other fire departments and government agencies across the shore with their own underwater programs. His concern for his brothers and sisters in Fire and EMS service positons led him to assist in forming a Critical Incident Stress Management Team within The Salisbury Fire Department which was designed to help those emergency workers deal with Traumatic Incidents. When not working to help others in his community, David could be found traveling in the Caribbean and searching for the next great dive. He found his peace and happiness under the waves and in the reefs of The Gulf of Mexico, the Caribbean, and The Pacific. In addition to his father, he is survived by his sons, Ian David Insley (Kimberly) of Bridgewater, NJ, and Shane Allen Insley of Delmar; sisters, Dana E. Insley of Ewell, MD, and Leslie A. Insley- Smith (Doug) of Bishopville, MD; nieces and nephews, Caitlyn Ardis (Kevin), Mikayla Insley-Evans, Emily Cropper, Alexis Williams, and Elijah Insley-Evans; a great niece and nephew, Layla and Kashton; and his extended family in EMS and fire service across Delmarva. A visitation for family and friends will be held from 11:00 am to 1:00 pm on Tuesday, June 19, 2018 at Emmanuel Wesleyan Church, 217 Beaglin Park Drive in Salisbury. The funeral service will begin at 1:00 p.m. Pastor Mark Bunting will officiate. In memory of Mr. Insley, contributions may be sent to IAFF Center of Excellence for Behavioral Health Treatment and Recovery, 13400 Edgemeade Road, Upper Marlboro, MD 20772. Arrangements are in the care of Short Funeral Home of Delmar. Online condolences may be sent to the family by visitingwww.shortfh.com.

David Allen Insley, Jr., 56, of Delmar passed away peacefully at his home on Monday, June 11, 2018. He was born February 28, 1962 in Salisbury, a son of David Allen Insley, Sr. of Mardela Springs and the late Helen D. Insley, who passed on October... View Obituary & Service Information

The family of David Allen Insley Jr. created this Life Tributes page to make it easy to share your memories.

Send flowers to the Insley family.