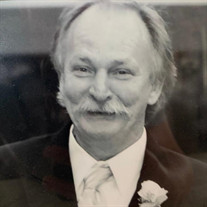 David Marshall Beach, 62, of Delmar passed away on Friday, June 4, 2021 surrounded by his loving family, at TidalHealth Peninsula Regional in Salisbury. He was born on March 18, 1959, in Pennsylvania, a son of Lenora Faye Beach and the late Paul Marshall Beach. David retired from Spartech in Salisbury in October 2020 after 37 years of service. He loved spending time with his grandsons, and especially enjoyed making big family dinners for the holidays. His baked macaroni and cheese and oyster dressing were just a couple of his favorite recipes to make for those that came over to their home. He loved gardening and growing vegetables and was a skilled woodworker. Those skills made him able to build both homes his family lived in through the years. He is survived by his loving wife of 38 years, Sandy Beach; children, David “Day Day” Beach, II, Maribeth Singleton (Adam), and Jessica Elliott (Dustin); grandchildren, Bray Hill and his sibling to be born in July, John Mark Singleton, Matthew Singleton, Jr., Lane Elliott, Dustin Elliott, Jr. and Hayden Elliott; sister, Nancy Brown (Mike); special niece, Kelly Mowbray (Kevin); sisters-in-law, Terry Moore and Kathryn Beach; special friends, Dickie Nichols, Ed Fisher, and Jeff Moore; and several nieces and nephews. In addition to his father, he was preceded in death by his brother, Paul Beach; sisters, Paula Jean Beach and Marianne Beach; mother-in-law, Mary Louise Moore; father-in-law, Robert “Bobby” Moore; and a brother-in-law, Robert C. Moore, II. Services will be held at a later date. In memory of David, contributions may be sent to a charity of your choice. Arrangements are in the care of Short Funeral Home in Delmar. Online condolences may be sent to the family by visiting www.shortfh.com.

David Marshall Beach, 62, of Delmar passed away on Friday, June 4, 2021 surrounded by his loving family, at TidalHealth Peninsula Regional in Salisbury. He was born on March 18, 1959, in Pennsylvania, a son of Lenora Faye Beach and the late... View Obituary & Service Information

The family of David M. Beach created this Life Tributes page to make it easy to share your memories.

David Marshall Beach, 62, of Delmar passed away on Friday, June...

Send flowers to the Beach family.