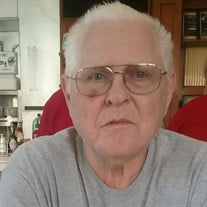 DELMAR, MD – Darrell D. Spiker, 76, of Delmar, MD (formerly of New Castle, PA), passed away on Monday, December 10, 2018. Darrell was born October 30, 1942, in New Castle, Pennsylvania, a son of Dale D. and Dorothy (Shaffer) Spiker. He was a graduate of New Castle High School class of 1960 and a graduate of Youngstown State University, having earned a BS in Electrical Engineering. He proudly served his county in the USAF during the Vietnam Era. While stationed overseas in the Philippines, he spent most of his enlistment time on temporary duty in the mountains of Thailand in the field of radar repair and support for the troops in Vietnam. His career led him to Sawhill Tubular, Cyclops Division (Sharon, PA), Wheatland Tube Company (Wheatland, PA, and later in Little Rock, AR), Shenango China (New Castle, PA), Thiokol Corporation (Promontory, UT), and Ameristar Fence (Tulsa, OK). He retired in 2007 and returned to New Castle, PA. He recently moved to Delmar, MD, to be closer to his son Dan, with whom he had a special bond. Through the years, they shared a collection of cars which had special meanings to them. Darrell was a long-time member of Trinity Episcopal Church in New Castle, PA, and had attended St. Philips Episcopal Church in Laurel, DE. He was an avid fan of the Pittsburgh Steelers and NASCAR; and he had a special place in his heart for dogs and cats, especially his beloved rescue Mr. Kitty. Darrell was a proud Eagle Scout and a member of the Order of the Arrow. He was a member of the Rapid Tappets Antique Car Club and a past board member of the Shenango China Federal Credit Union. He is survived by his “high school sweetheart” and wife of 54 years, Cynthia O’Neill Spiker (Cyndy), his son Daniel M. Spiker (Danny) of Delmar, MD, and a brother Douglas Spiker of New Castle, PA. A memorial service will be held at a later date in Trinity Episcopal Church in New Castle. On line condolences may be sent to the family by visiting www.shortfh.com.

The family of Darrell D. Spiker created this Life Tributes page to make it easy to share your memories.

Send flowers to the Spiker family.