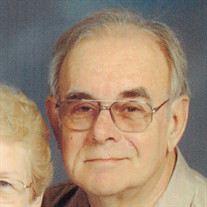 Darald Allen Fischer, 84, of Delmar, passed away on Monday, June 8, 2020 at Seasons Hospice at Christiana Hospital. He was born on August 10, 1935 in Deerfield, Michigan, the son of the late Christof and Hazel Fischer. Darald grew up in Michigan where he met his wife during his high school years. After graduation, he attended Central Michigan University, and remained a faithful Michigan college sports fan throughout the years. He worked for Dresser Wayne Industries in Salisbury for 25 years. After retirement, he went to work for a cruise line in Ocean City for a year and then he worked in the tool department in Lowe’s in Salisbury for 10 years. He loved to travel with his family, read, take naps, and go out to eat for breakfast or to Delmar Pizza for dinner. He was a skilled woodworker and every Christmas he gave his children a gift he had made special for them. He was blessed to have shared a beautiful life together with his wife and family. He is survived by his loving wife of almost 65 years, Shirley A. Fischer; children, Darald Allen Fischer, Jr. (Carol) of Elsmere, Kentucky, Sheryl Ann Curtis (Frank) of Delmar, Dave Fischer (Kim) of Laurel, Kevin L. Fischer (Jennifer) of Selbyville; grandchildren, Christopher Allen Fischer, Keri Michelle Fischer-Seehuetter, LeAnne M. McCord, Darald Allen Fischer III, Lauren A. Hirsch-Farrow (Jon), James Ellis, Samantha Myrick, Uriah Curtis, Rebecca Curtis, Tiffany Curtis, Zachary Curtis, Branden Fischer, Kyle Fischer, Brittany Bryan, Connor Webster, Emily Webster, Brooke Fischer, and Sammi Fischer; great-grandchildren, Ethan Fischer, Alexis Fischer, Madison Fischer, Raegan Seehuetter, Micah Farrow, and Oliver Ward; and his beloved dog “Chelsea.” A visitation for family and friends will be held from 11:00 a.m. to 1:00 p.m. on Thursday, June 11, 2020 at Short Funeral Home, 13 E. Grove Street in Delmar. Due to the current restrictions placed on gatherings, the funeral service will be private. Interment will be in Parsons Cemetery in Salisbury. The family would like to express their gratitude to the doctors and nurses at Seasons Hospice at Christiana Hospital for the special care they showed Mr. Fischer and his family during his stay. In lieu of flowers, contributions may be sent in memory of Mr. Fischer to Seasons Hospice, 220 Continental Drive, Suite 407, Newark, DE 19713, The Little Sisters of Jesus and Mary, P.O. Box 1755, Salisbury, MD 21802, or The Humane Society of Wicomico County, 5130 Citation Drive, Salisbury, MD 21804. Arrangements are in the care of Short Funeral Home in Delmar. Online condolences may be sent to the family by visiting www.shortfh.com.

Darald Allen Fischer, 84, of Delmar, passed away on Monday, June 8, 2020 at Seasons Hospice at Christiana Hospital. He was born on August 10, 1935 in Deerfield, Michigan, the son of the late Christof and Hazel Fischer. Darald grew up in Michigan... View Obituary & Service Information

The family of Darald Allen Fischer created this Life Tributes page to make it easy to share your memories.

Darald Allen Fischer, 84, of Delmar, passed away on Monday, June...

Send flowers to the Fischer family.