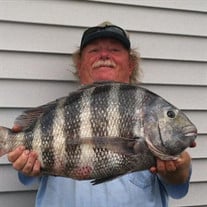 On Sunday, September 22, 2019, Daniel R. Thomas passed away at his home in Delmar, MD at age 63. Daniel was born on September 12, 1956 in Niagara Falls, NY, but grew up in Onley, VA. He graduated Onancock High School in 1974. He had a daughter, Erin Thomas, while living in Charleston, SC. Dan was better known to many as The Fishing Man or The Crab Man, nicknames that came from his deep love of the water and all forms of fishing. He was an avid and skilled angler widely regarded to be a local expert on the Eastern Shore. In 2012, Dan set the Maryland state record with a 13.3 pound sheepshead. Dan inherited an entrepreneurial spirit from his father John, and was happiest as his own boss. He ran several successful business ventures over the years, including American Coupon Company and most recently, Shore Brothers Seafood with his late brother John. He also shared his love of reading with his daughter, and they read countless numbers of books together. Dan was preceded in death by his father John R.M. Thomas; his brother John M. Thomas; and nephews, Jacob Schertz and Jason Taylor. He is survived by his mother Margaret Thomas; daughter Erin Thomas and son-in-law Patrick Steele; beloved grandson Jameson Daniel Steele; brother Paul Thomas and wife Linda; brother Steve Thomas and wife Judie; sister Pam Schertz and husband Steve; sister Janet Taylor and husband Vince; sister-in-law Diane Thomas; and various other friends and family. A celebration of life service will be held on Friday, October 18, 2019 at 3 p.m. at the Delmar VFW Post 8276, 200 W. State Street, Delmar, Maryland, 21875. Memorial contributions may be made in his memory to the Jake Schertz Academic Wrestling Fund, c/o Wicomico County Board of Education, 2424 Northgate Drive #100, Salisbury, MD 21801. Services are in the care of Short Funeral Home in Delmar. Online condolences may be sent to the family by visiting www.shortfh.com.

The family of Daniel R. Thomas created this Life Tributes page to make it easy to share your memories.

Send flowers to the Thomas family.