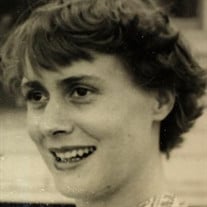 Delmar- Clara Etta Larmore, 95, of Delmar passed away peacefully on Monday, July 15, 2019 at Lakeside at Mallard Landing in Salisbury. Clare was born October 29, 1923 in Hagerstown, daughter of the late George C. Herbert and Cora (Moser) Herbert. She graduated from Hagerstown High School with the class of 1941. She then attended Roanoke College before supporting the war efforts by working at Fairchild Aviation and went on to pursue her dream of becoming a nurse and graduated from Washington County Hospital School of Nursing in 1947. She worked as a Registered Nurse at Hagerstown Memorial Hospital where she met and fell in love with a young resident doctor, the late Dr. Ernest M. “Toby” Larmore. They married in 1949 and moved to Delmar to start his medical practice. Together they enjoyed 57 years of marriage. Clare loved the Delmar community and the Eastern Shore. She became a long time member of St. Stephen’s United Methodist Church in Delmar where she volunteered several years in the church office and belonged to the prayer shawl knitting group. She remained active in the community by volunteering at Peninsula Regional Medical Center for over 20 years. Clare will be remembered as a loving wife, mother, grandmother and great grandmother. She loved reading, knitting, cooking and spending time with her family. She is survived by her children Stacey Whiteman and her husband Ian of Spain; David Larmore and his wife Jo of Laurel; Steven Larmore and his wife Virginia of Florida; Dana Banziger and her fiancé Courtney Scott of Virginia; Suzy Skidmore and her husband Bill of Virginia; and Todd Larmore of Delmar: grandchildren, Toby, Kate, Medina, Hanna, Brittany, Max, Molly Clare, Hans, and Sam: step-grandchildren, Muhammad and Zakkariyya: great grandchildren Sienna, Arden, Jackson, Quinn, Gabriel, Shamsi, Rosa, Tariq, Samira and Farid; and step great grandchildren, Eddie, Emily and Kei. She is also survived by sister-in-law Sara Lee Brohawn and her husband Donald of Tyaskin and several nieces and nephews. In addition to her parents, she was preceded in death by her husband Dr. Ernest M. Larmore and sisters Madeline Hudson and Leah Burhans. A memorial service will be held on Monday, July 22, 2019 at 11:00 a.m. at St. Stephen’s United Methodist Church in Delmar. The Reverend Phyllis Walton will officiate. Following the service, family and friends are invited to a fellowship luncheon at Camelot Hall. The burial will be private. In lieu of flowers, contributions may be made in her memory to St. Stephen’s United Methodist Church, 101 E. State Street, Delmar, DE 19940 or Coastal Hospice, P.O. Box 1733, Salisbury, MD 21802. Arrangements are in the care of Short Funeral Home in Delmar. Online condolences may be sent to the family by visiting www.shortfh.com.

The family of Clara Etta Larmore created this Life Tributes page to make it easy to share your memories.

Send flowers to the Larmore family.