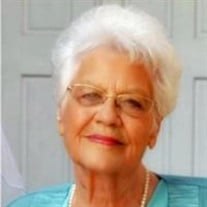 Salisbury – Christine “Hilda” Wagner of Salisbury, finished her earthly journey on Sunday, March 7, 2021 at the Wicomico Nursing Home, and her faith in God and His Word became sight as she peacefully entered the presence of her Savior, the Lord Jesus Christ. Born March 9, 1931, in Boyce, Louisiana, she was a daughter of the late Edward H. Brow and Tobitha Irene Brow. She was preceded in death by her husband, Hunter C. Wagner in November of 1997. Mrs. Wagner retired from Deer’s Head Center as a nurse where she developed several close friendships with co-workers over her 35 years of service. She was a faithful and active member of Fellowship Baptist Church in Salisbury until her physical health declined during the last three years. She loved the Lord and her family and friends and will be missed. She is survived by a daughter, Theresa C. Holliday and her husband David of Supply NC; a son, Rev. Steve E. Wagner and his wife Myrtis of Salisbury MD; a son, Rev. John C. Wagner and his wife Kim of Greenville SC; and a daughter, Lisa K. Willey of Salisbury MD. “MomMom” is survived by 12 grandchildren, 23 great grandchildren, and 5 great-great-grandchildren, several nieces and nephews, a brother-in-law, Dan Airhart of Dry Prong LA, and a sister-in-law, Marge Wilson of Salisbury MD. She was also preceded in death by her sisters, Gloria Yates, Tobitha Wagner, Evon Airhart and brothers Wallace Brow and Mark Wayne Brow, her son-in-law, Doug Willey, and granddaughter, Wendy Sue Wagner Alpaugh. A funeral service will be held Thursday, March 11 at 10:00 a.m. at Fellowship Baptist Church, 1308 Robins Ave., Salisbury MD. Rev. Steve Wagner and Rev. John Wagner will be officiating. Burial will be private. The service will be livestreamed by visiting the YouTube channel for Fellowship Baptist Church at https://www.youtube.com/channel/UCDZH-WLa30_p1yhMIRrxxGA. The children would also like to thank Wicomico Nursing Home for mom’s compassionate care she received while a resident there. In lieu of flowers, donations may be made in Mrs. Wagner’s memory to Fellowship Baptist Church, 1308 Robins Ave., Salisbury MD 21804. Arrangements are in the care of Short Funeral Home in Delmar. Online condolences may be sent to the family by visiting www.shortfh.com.

Salisbury &#8211; Christine &#8220;Hilda&#8221; Wagner of Salisbury, finished her earthly journey on Sunday, March 7, 2021 at the Wicomico Nursing Home, and her faith in God and His Word became sight as she peacefully entered the presence of... View Obituary & Service Information

The family of Christine "Hilda" Wagner created this Life Tributes page to make it easy to share your memories.

Send flowers to the Wagner family.