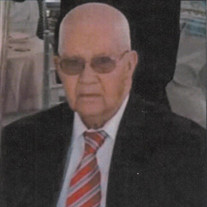 Charles G. Robinson of Mardela Springs, Maryland, passed away peacefully at the age of 96 on Sunday, May 16, 2021 at TidalHealth Peninsula Regional in Salisbury. He was born August 28, 1924 in Nanticoke, Maryland, a son of the late Edgar and Gertie (Harrington) Robinson. Charles proudly served his country in the US Army from 1947 to 1948. He grew produce and vegetables for the Army in his early days. When re-enlistment became an option, the government decided he was more valuable to the troops as a produce supplier than to go overseas and fight. Therefore, he stayed home and served in the Army Reserves from 1948 to 1954. Charles believed in an honest day’s work and in 1952 took a job as a delivery truck driver for Taylor Oil Co. In 2012, at the age of 88, he decided to retire after 60 years of service at Taylor. He grew up farming and other than driving a truck, farming gave him a reason to get up every day. He was the consummate farmer; always providing the best products and the straightest rows of beans and other vegetables. He attended Delmarva Evangelistic Church in Salisbury until his health declined a few years ago. He will be remembered as a hard-working provider for his family. He was a wonderful cook and his family always enjoyed his homemade pies, cakes and sweets. He is survived by sons, Charles “Chuck” S. Robinson and wife, Angela of Mardela Springs and Gary L. Ennis and his wife, Stephanie of Delmar; grandchildren, Cory Robinson, Cody Robinson and Brittany Ennis; great grandchildren, Austin Lee Ennis and Preston Lee Ennis; and a brother, William R. Robinson of Florida. He is also survived by several nieces and nephews. In addition to his parents, he was preceded in death by his beloved wife, Kathleen (Johnson) Robinson; a grandson, Brandon Ennis; and siblings, Ray B. Robinson, Walter Robinson, Rachel Parsons and Minnie Davis. A visitation for family and friends will be held on Monday, May 24, 2021 from 10:00 a.m. to 11:00 at Short Funeral Home in Delmar, followed by a funeral service which begins at 11:00. Pastor Buzz Gregory will officiate. Interment will follow at Wicomico Memorial Park in Salisbury. Arrangements are in the care of Short Funeral Home in Delmar. Online condolences may be sent to the family by visiting www.shortfh.com.

Charles G. Robinson of Mardela Springs, Maryland, passed away peacefully at the age of 96 on Sunday, May 16, 2021 at TidalHealth Peninsula Regional in Salisbury. He was born August 28, 1924 in Nanticoke, Maryland, a son of the late Edgar and... View Obituary & Service Information

The family of Charles G. Robinson created this Life Tributes page to make it easy to share your memories.

Send flowers to the Robinson family.