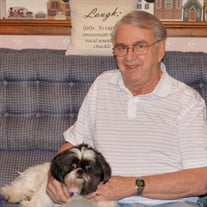 Charles W. Jones - March 7, 1940 - November 4, 2020. Preceded in death by his father R. Alda Jones, mother Mary C. Jones, and brother Beverly Jones. He is survived by his wife Nina Ray Jones of 58.5 years, daughters Dina Jones, Marti Harrison and Sonia Ravelo, son Chuck Jones, grandson Tyler Riley and his wife Valerie Riley, granddaughter Jenna Riley, great-granddaughters Brooklyn Brady and Kennedy Riley, and great-grandson Blake Riley; brothers Ron and Richard Jones and his beloved dog Biffie. C.W., Mr. Charlie, Dad, Pop; a man who must be characterized by more than the merit of his “work.” He was a leader, a counselor, a coach, a friend, a husband, father and pop-pop. He spent the majority of his life giving back to his community, helping those less fortunate than he. You could find him at any given time delivering food to those in need or repairing someone’s home with no project being too big or too small. A volunteer of the Appalachia Service Project and Habitat for Humanity, and later co-founder of Small Miracles created with a few fellow members of Community Church in Ocean Pines. His Mr. Fix-It mentality stretched far beyond the Eastern Shore. His devotion to God was apparent not only in the way he lived his life, but as a counselor for Chi-Rho Youth Group where he became an integral part of so many childhood memories for the youth in Snow Hill. Year after year, he loved being a part of the Chi-Rho retreat, from working in the kitchen for the spaghetti dinner fundraiser with his wife & friends, to travelling to Camp Soles in snowy Pennsylvania. He may have been your counselor, but he was just as much one of the kids, organizing one prank better than the next. He loved to play softball and if you were fortunate enough, he may have also been your coach where you probably received a little tough love, but love nonetheless. Snow Hill Little League was blessed to have he and Nina as a dynamic T-Ball coaching duo. Eventually, he retired from playing and coaching to watching Tyler in the stands. His greatest role was cheerleader, sometimes to a fault, but in the best possible sense. His love for his community was nothing in comparison to that of his wife, children, grandkids, great-grandkids and friends. He treated everyone as family. He loved golfing, although we may remember him coming more frustrated than when he left. He loved installing pools and delivering drinks to Nina as she floated around their own pool. He loved spending time with his family and friends sharing laughs and most likely a little mischief. It is impossible to summarize his life within the limits of these words. When asked about Charlie Jones, the resounding agreement is “he was just cool.” And he was. For those of us lucky enough to have known him, we will forever be changed by the impact he has left on us. His soul was always too big for life on this earth and although his time here is through, his legacy will live far beyond anything he could have ever dreamed. We love him more than most. A visitation for family and friends will be held from 1:00 to 3:00 pm on Saturday, November 14, 2020 at the Snow Hill Fire Department. Due to current gathering restrictions, masks and social distancing will be required. In memory of Mr. Jones, contributions may be sent to Coastal Hospice, P.O. Box 1733, Salisbury, MD 21802. Arrangements are in the care of Short Funeral Home in Delmar. Online condolences may be sent to the family by visiting www.shortfh.com.

The family of Charles W. Jones created this Life Tributes page to make it easy to share your memories.