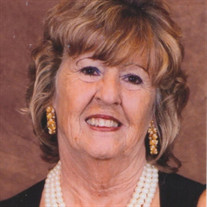 Carolyn Shiles Groton, 77, of Pace, FL passed away Tuesday, November 16, 2021 in Florida, where she had resided for the past 17 years. Carolyn was born May 1, 1944 in Salisbury, a daughter of the late Harold Stanley Shiles and Sadie Wilson Shiles. She attended elementary and high school in Mardela Springs. After graduation, she attended Jefferson School of Commerce in Salisbury, MD. Carolyn was an active member of Snethen Methodist Church since early childhood. She began employment with Pocahontas, Inc. in Salisbury and retired from Peninsula Insurance Co after over 25 years of service. At the tender age of 20, she married John Groton after a two and-a-half month courtship. Together they enjoyed 57 years of marriage. She accompanied John to Frankfurt, Germany. They traveled extensively through Europe, Panama, and Hawaii. They retired in 2004 and moved to Pace, FL to be near their children, Christine and Ron (Lisa), and their grandchildren, Hanah and Gabriela. In addition to her parents, Carolyn was preceded in death by her daughter, Christine; her brother, Milton; her brother-in-law, Gene Lloyd; and her in-laws, Herbert and Gladys Reed. She is survived by her husband of 57 years, John R. Groton, of Pace, FL; a son, Ronnie (Lisa) Groton, of Pace, FL; two special granddaughters, Hanah and Gabriela, of Pace, FL; a sister, Jeannie Lloyd of Delmar; nephews, Richard Lloyd of OH, Christopher Lloyd of SC, Kory Shiles of Mardela Springs and Dustin Shiles of Mardela Springs; a niece, Michele Jones of Delmar; and several great nieces and nephews. A celebration of Carolyn’s life will be held on Saturday, December 11, 2021 at 1:00 p.m. at Snethen United Methodist Church, Route 54, Delmar. David Mister, Lay Leader, will officiate. Interment will be private. The family expresses appreciation for friendships and kindnesses of neighbors and friends and to Dr. Uyen K. Ngyuen and staff at West Florida Hospital in Pensacola, FL. In lieu of flowers, memorial contributions may be made in her memory to Snethen United Methodist Church, c/o Jan Frey, 4203 Delmar Road, Delmar, DE 19940. Arrangements are in the care of Short Funeral Home in Delmar. Online condolences may be sent to the family by visiting www.shortfh.com.

Carolyn Shiles Groton, 77, of Pace, FL passed away Tuesday, November 16, 2021 in Florida, where she had resided for the past 17 years. Carolyn was born May 1, 1944 in Salisbury, a daughter of the late Harold Stanley Shiles and Sadie Wilson Shiles.... View Obituary & Service Information

The family of Carolyn Shiles Groton created this Life Tributes page to make it easy to share your memories.

Send flowers to the Groton family.