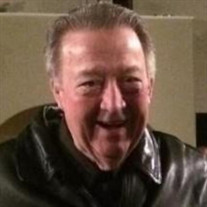 Billie Ray Shaver, 79, of Salisbury, passed away peacefully at TidalHealth Peninsula Regional on Saturday, September 19, 2020, after a brief stay. He was born July 1, 1941, in Statesville, NC, the only son of the late Raymond L. and Beatrice (née Tilley) Shaver. In addition to his parents, he was preceded in death by his first wife Janet Shaver; son Raymond A. Shaver; and grandson Wayne T. Bailey, II. Billie graduated from Wicomico High School class of 1959. Upon graduating, he proudly served his country in the U.S. Navy until his honorable discharge in 1963. In his younger days, he worked as an EMT in Southern Maryland and was employed at Paramount Pest Control. He dedicated the remainder of his career in sales and finance at various Eastern Shore automotive dealerships, most notably Pohanka Motors in Salisbury. Billie was a sports enthusiast who especially loved NASCAR and the Baltimore Ravens. He had wonderful memories attending many NASCAR southern events with his Uncle Johnny. Most importantly to Billie Ray, he was a devout Christian and a long time active member, song leader and elder of Woodside Chapel. More recently he was a faithful member and Bible study leader at Emmanuel Wesleyan Church in Salisbury. Billie’s philosophy was simple: he wanted everyone to know “To live is Christ and to die is gain! Win-Win!” He is survived by his loving wife of 18 years, Cindy B. Shaver; daughter-in-law, Dee Shaver; grandchildren, Lyndsay, Joshua and Zachary Shaver; stepchildren, David M. Dunbar (Marsha), James H. Grove (Bethany), Eugene “Tink” Grove, III (Laura), Wayne Thomas Bailey (Mary) and Aimee J. Lloyd (Daniel); 21 additional grandchildren; and several great grandchildren. He is also survived by beloved aunts, Martha Thurstan and Margaret Tilley; and sisters-in-law, Donna Savage, Patricia Bolte, and Kathy Singer (Tom). A funeral service will be held on Wednesday, September 30, 2020, at 11:00 a.m. at Emmanuel Wesleyan Church in Salisbury; family and friends may call from 10:00 to 11:00. Pastor Mark Bunting will officiate. Interment with military honors will follow at the Eastern Shore Veterans Cemetery in Hurlock. Due to COVID-19 restrictions, the interment will be private. Memorial contributions may be made in his memory to Emmanuel Wesleyan Church, 217 Beaglin Park Drive, Salisbury, MD 21804. Arrangements are in the care of Short Funeral Home in Delmar. Online condolences may be sent to the family by visiting www.shortfh.com.

Billie Ray Shaver, 79, of Salisbury, passed away peacefully at TidalHealth Peninsula Regional on Saturday, September 19, 2020, after a brief stay. He was born July 1, 1941, in Statesville, NC, the only son of the late Raymond L. and Beatrice... View Obituary & Service Information

The family of Billie Ray Shaver created this Life Tributes page to make it easy to share your memories.

Billie Ray Shaver, 79, of Salisbury, passed away peacefully at...

Send flowers to the Shaver family.