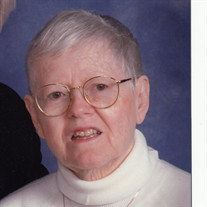 Joann Shupp, 83, of Delmar, Maryland, passed away Monday, January 20, 2020, at her home surrounded by her loving family. She was born May 17, 1936 in Dover, Pennsylvania, a daughter of the late Joseph Taylor and Marian L. Dillon. Joann earned two degrees in music, magna cum laude, from Northern Virginia Community College. She began her career as an organist at the age of 15 in York, Pennsylvania, and continued as organist and choir director at Bethlehem Lutheran Church, Lynchburg, Virginia, from 1958-1981. She continued serving other denominations in the Northern Virginia area until 2007. She served as Parish Administrator at her home church, Holy Trinity Lutheran Church, Falls Church, Virginia from 1990-2002. In 2015 she and her husband moved to Delmar, Maryland. Joann was devoted to her family and loved by all who knew her. We give thanks to God for her life and witness to the Lord. She is survived by her husband, Lloyd M. Shupp; son, Joseph D. Hedges, Jr. (Trish) of Lynchburg, Virginia; daughter, Deborah J. Keenan (Timothy) of Laurel, Delaware; sister, Sandra Miller (Robert); grandchildren, Michelle Mack (Jason), Jessica Hedges, Jennifer Hedges, Kennedy Wilson (Michael), and Zackary Keenan (Staci); great grandchildren, Jordan, Carter, Camryn, Freedom, Faith, Ariana, Makaila, Logan, Koa, and Kenneth. In addition to her parents, she was preceded in death by daughter, Joni Hedges Dalton; son, Scott Alan Taylor; and sister, Judy Eaton. A visitation will be held at Short Funeral Home, Delmar, Delaware, Thursday, January 23, from 5-7 pm. A second visitation will be held at Emig Funeral Home, Dover, Pennsylvania, from 10:30-11:15 am Saturday, January 25, followed by a graveside service at noon at Altland’s Meeting House Cemetery, Paradise Township, York County, Pennsylvania. The Reverend Kathleen Kuehl will officiate. In lieu of flowers, contributions may be made to Cure Alzheimer’s (curealz.org). Arrangements are in the care of Short Funeral Home in Delmar. Online condolences may be sent to the family by visiting www.shortfh.com.

Joann Shupp, 83, of Delmar, Maryland, passed away Monday, January 20, 2020, at her home surrounded by her loving family. She was born May 17, 1936 in Dover, Pennsylvania, a daughter of the late Joseph Taylor and Marian L. Dillon. Joann earned... View Obituary & Service Information

The family of Betty Joann Shupp created this Life Tributes page to make it easy to share your memories.

Send flowers to the Shupp family.