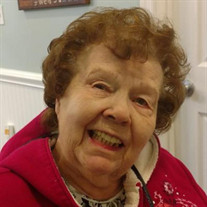 Betty Jean Benston, 91, formerly of Ocean City, Maryland passed away to be with her Lord and Savior on Monday, June 29th, 2020 at Delmar Villa in Delmar, Maryland. Born in Cumberland, Maryland on September 18, 1928, she was the daughter of Charles W. and Leona Harper. After graduating with the Class of 1946 from Allegany High School, Betty worked as a telephone operator for C & P Telephone Company in Berlin and Ocean City, Maryland where she met her former husband. When her children were young, Betty owned and managed Edgemore Cabins during the summer months in West Ocean City. In her free time she enjoyed flower gardening and taking her children to the beach. She was a homemaker when they were young but later went back to school graduating from the Computer Programming Institute of Delaware in Wilmington. She worked for Metropolitan Insurance Company, Ocean City Chamber of Commerce and then the US Postal Service in Ocean City then Salisbury until her retirement. Betty was a member of St. Mary’s Star of the Sea Catholic Church and The American Legion Auxiliary Post #166 of Ocean City. Her later years she spent in Salisbury at her daughter’s home then more recently at Delmar Villa Assisted Living. She was a very loving mom and known by her grandchildren as “Mom Mom Betty” and always excited about spending time with them. She truly will be missed by her family. Betty is survived by her four children, Teresa (Terri) Ryall and husband John, Kathy Williams and husband Dean, Karen Miller, and Michael H. Benston now all residing in Salisbury. Also 7 grandchildren: Stephen Charrier and wife Diana of Severna Park, William Charrier and wife Elizabeth of Winchester, VA, Brad Williams and wife Brittney of Wake Forest, NC, Ross Williams and wife Jesse of Springtown, PA, Kelly Williams of Salisbury, MD, Jessica Miller of Seoul, South Korea, and Katelyn Miller of Chambersburg, PA and 6 great grandchildren; Brett Charrier and wife Casey of Jessup, MD, Andrew Charrier of Severna Park, Alexandra, Julia, and Evelyn Charrier of Winchester, VA and Robin Williams of Springtown, PA. Betty was predeceased by her only brother, Charles W. (Wally) Harper, Jr. of Cumberland, MD, her ex-husband Carlton R. (Ben) Benston of Ocean City, MD and her daughter-in-law Jennifer Benston of Binghamton, NY. Betty’s children would like to thank the staff at Delmar Villa for the gentle and attentive care given to their mother for the past few years. Service and interment will be private. Arrangements are in the care of Short Funeral Home in Delmar. Online condolences may be sent to the family by visiting www.shortfh.com.

Betty Jean Benston, 91, formerly of Ocean City, Maryland passed away to be with her Lord and Savior on Monday, June 29th, 2020 at Delmar Villa in Delmar, Maryland. Born in Cumberland, Maryland on September 18, 1928, she was the daughter of Charles... View Obituary & Service Information

The family of Betty Jean Benston created this Life Tributes page to make it easy to share your memories.

Send flowers to the Benston family.