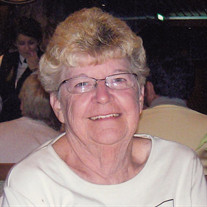 DELMAR- Bernice Dill Hearn, 86, of Delmar, passed away peacefully on Friday, January 24, 2020 at the Lofland Park Center in Seaford. She was born January 22, 1934 in Delmar, a daughter of the late Clarence Howard Elliott and Bessie Evans Elliott. Bernice graduated from Wicomico High School with the class of 1951 and not long after married her high school sweetheart, Bob Dill. She worked many years in her younger days as a switchboard operator at Sunshine Laundry in Salisbury and Berlin. Her affection for home decorating led her to work for several years at The Country House in Salisbury, a job she truly loved. She retired from Delaware Technical and Community College as a night-time receptionist. She was an active, lifetime member of Melson United Methodist Church in Delmar and will be missed sorely in the Melson’s community. Playing cards, watching the O’s and cooking were some of her favorite activities. In addition to her infectious smile, she will be remembered as a loving wife, mother, grandmother, great grandmother, sister and friend to many. She is survived by her children, Debbie Pusey and husband Frank of Delmar, Robin Carey and husband Dale of Delmar and Todd Dill and wife Julie of Salisbury; grandchildren, Ryan Pusey (Kathryn), Kristen Throm (Mark) and Shannon Juris (Paul), all of Delmar, Christien Carey, Nathan Dill, Emily Dill and Mathew Dill, all of Salisbury; great grandchildren, Carson, Mason, Addison, Grayson, Jordan, Noah and Baylee; and a brother, Lester Elliott and wife Eleanor of Delmar. In addition to her parents she was preceded in death by her first husband and father of their children, Robert “Bob” Joseph Dill (1971); her second husband, Brooks Hearn (2006); a sister, Ruth Bailey; and a brother, Calvin Elliott. A visitation for family and friends will be held on Tuesday, January 28, 2020 from 10:00 to 11:00 a.m. at Short Funeral Home in Delmar, where a funeral service will be held at 11:00 a.m. The Reverend John Oltman will officiate. Interment will follow at Melson’s Cemetery. Memorial contributions may be made in Bernice’s memory to Melson United Methodist Church, 32705 Melson Road, Delmar, MD 21875. Arrangements are in the care of Short Funeral Home in Delmar. Online condolences may be sent to the family by visiting www.shortfh.com.

DELMAR- Bernice Dill Hearn, 86, of Delmar, passed away peacefully on Friday, January 24, 2020 at the Lofland Park Center in Seaford. She was born January 22, 1934 in Delmar, a daughter of the late Clarence Howard Elliott and Bessie Evans Elliott.... View Obituary & Service Information

The family of Bernice Dill Hearn created this Life Tributes page to make it easy to share your memories.

Send flowers to the Hearn family.