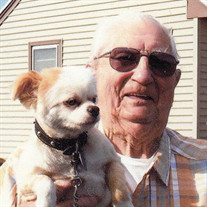 Benjamin D. Lewis, 92, of Salisbury, died Thursday, May 18, 2017 at his home, surrounded by his loving family. He was born September 10, 1924 in Whaleyville, a son of the late Carlton and Clara Ellen Lewis. Mr. Lewis proudly served his country in the US Army during WWII. He was captured in Germany during the Battle of the Bulge and remained a POW for some time, until his release at the end of the war. He received several commendations, most notably the Purple Heart. Following his return from the war he worked as a mechanic for Pepsi Co. He will be forever remembered for being a faithful Pepsi drinker. For many years he was an active member of the Church of God of Prophecy in Delmar and loved his church. His memberships included the VFW Meuse Post 194 in Salisbury, D.A.V., and POW East Charter. He was a wonderful grandfather and enjoyed spending time with his grandchildren. He loved the outdoors and fishing in particular. He had a special place in his heart for his little dog, “Snoopy” and his many cats. He is survived by daughters, Lydia M. Moore (Kevin) of Salisbury and Sue Lynn Kukta (Eddie) of Vienna; sons, Michael Scott Lewis of Salisbury and Dennis J. Marine of Florida; 10 grandchildren; several great grandchildren; 2 great-great grandchildren; and a sister, Norma Lee Adkins of Dagsboro. He is also survived by many nieces and nephews. In addition to his parents, he was preceded in death by his wife, Beulah Lewis, who passed in 2015; a daughter, Rhoda Ellen Ellingsworth; a brother, James Lewis; and sisters, Gladys Littleton, Elizabeth Harris, Dollie Brown and Hattie Bunting. A visitation for family and friends will be held on Tuesday, May 23, 2017 from 10:00 a.m. to 11:00 a.m. at Short Funeral Home in Delmar, followed by a funeral service which begins at 11:00. Pastor Michael Phillips will officiate. Interment with military honors will follow at Springhill Memory Gardens in Hebron. Memorial contributions may be made in his memory to VFW Meuse Post 194, 821 E William St, Salisbury, MD 21804 Arrangements are in the care of Short Funeral Home in Delmar. Online condolences may be sent to the family by visiting www.shortfh.com.

Benjamin D. Lewis, 92, of Salisbury, died Thursday, May 18, 2017 at his home, surrounded by his loving family. He was born September 10, 1924 in Whaleyville, a son of the late Carlton and Clara Ellen Lewis. Mr. Lewis proudly served his country... View Obituary & Service Information

The family of Benjamin D. Lewis created this Life Tributes page to make it easy to share your memories.