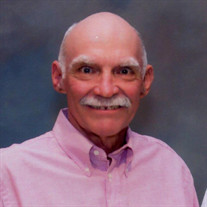 Barry Musser Wix, 79, of Seaford, Delaware, passed away unexpectedly on September 12, 2021, after a stroke following surgery. Barry was born on August 12, 1942, in Milford Memorial Hospital, a son of the late Norman Saunders Wix and Kathryn Musser Wix. He was raised in Harrington, DE, and graduated from Harrington High, Class of 1961. Early in life he found his lifelong passions for flying and golf, which he enjoyed until the end. Barry did not like to sit still and he never stopped doing what he loved. He played a round of golf at Hooper’s Landing Golf Course in Seaford on the Monday before his passing. And we’re all sure he ended up in “Wixieland” as he was frequently known to do - the cluster of trees to the right of hole #8. Barry was a private pilot for over 60 years. During that time he owned three planes, including a Piper Cherokee, a Piper Cub, and a Taylorcraft. He was a member of the Civil Air Patrol in the 80’s at Laurel Airport. He later moved to Bennett Airport in Salisbury. And then finally a private grass airstrip in Greenwood. His friends at the golf course would keep their eyes on the sky as Barry was known to buzz over in his little 2-seater yellow Taylorcraft and wave his wings at them. He also enjoyed going to the Harrington Casino. Barry was notoriously picky about his crab cakes, and he was thrilled to find one that met his high bar at Onion Jack’s. It didn’t hurt that all the servers knew his order and would bring it straight to him without a word as soon as he walked in and sat at his favorite high top table. If you go, stop in and order a crab cake sandwich, no bun, fries, and a glass of merlot for him. Barry was an excellent and enthusiastic dancer, and was not afraid to spontaneously cut a rug at family gatherings when a classic country western song that he loved would come on. He and his wife Sherry were members of the former Whirl-a-Ways Square Dance Club for many years and took their son on a tour of many churches and bowling alleys. Barry retired from the Dupont Company in Seaford after more than 40 years of service. He was very proud of his run that ended in 2001 at exactly 40 years, 2 months, 2 weeks, and 2 days. He enjoyed the Dupont retiree 25 year dinners, but unfortunately missed this year. He was a member and avid supporter of the Seaford Golf & Country club and enjoyed many meals and social gatherings there. When the clubhouse became the Nanticoke Senior Center he continued to visit regularly to play cards. Barry was a devoted husband and loving father and pop pop. He is survived by his wife and best friend of almost 55 years, Sherry Baker Wix; son, Brian Wix; grandson, Max Fischer Wix, Christina Fischer; brothers, Bruce and Brett (Brenda) Wix; brother-in-law and sister-in-law, Sam and Terri Fantasia and their son, Christopher Fantasia; special niece, Tammy Wix Donovan; niece, Nikki Zook Ward (Kyle); and nephews, Shawn Wix (Sharon) and Justin Zook (Cordelia). He is also survived by many cousins, including Betty Soucy who Barry was thrilled to finally visit in California. In addition to his parents and in-laws, he was preceded in death by a nephew, Kevin Wix, who left us too soon. A memorial service will be held on Friday, October 8, 2021 at 3:00 p.m. at Short Funeral Home, 13 E. Grove Street in Delmar. A visitation for family and friends will be held one hour prior to the service. Interment will be private. Due to the ongoing COVID pandemic, masks will be required. Memorial donations can be made to the American Cancer Society, Relay for Life Sussex County, P.O. Box 1877, Salisbury, MD 21802. Arrangements are in the care of Short Funeral Home in Delmar. Online condolences may be sent to the family by visiting www.shortfh.com.

Barry Musser Wix, 79, of Seaford, Delaware, passed away unexpectedly on September 12, 2021, after a stroke following surgery. Barry was born on August 12, 1942, in Milford Memorial Hospital, a son of the late Norman Saunders Wix and Kathryn... View Obituary & Service Information

The family of Barry Musser Wix created this Life Tributes page to make it easy to share your memories.

Send flowers to the Wix family.