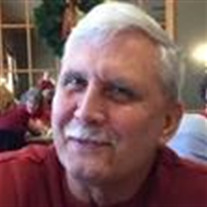 Laurel- Barry Edward Sullivan, 61, of Laurel, passed away peacefully Sunday, May 26, 2019 at Nanticoke Memorial Hospital in Seaford, after a long and courageous battle. He was born December 10, 1957 in Milford, a son of the late G. Fred Sullivan, Sr. and Naomi Bennett Sullivan. He was also preceded in death by his stepmother who raised him, Betty J. Sullivan. Barry graduated from Laurel High School with the class of 1975. He worked several jobs in the construction trade through the years but his most recent position at Kent Construction as construction superintendent was his favorite, a job he worked until his health forced him to slow down. Barry was gifted working with wood and could build almost anything. He enjoyed watching NASCAR, driving his old ’78 Ford truck and the outdoors; especially hunting, fishing, trips to the beach, cutting grass and spending time with his favorite dog, Lexi who passed in December. In 1982 Barry joined the Laurel Fire Department and remained a dedicated life member. In the past he served as engineer, vice president, trustee and had many years of service working with the Delaware Fire Police. He is survived by his wife of 22 years, Jo Ellen (Phillips) Sullivan; a daughter, Lindsey Jo Sullivan of Laurel; a grandson, who was the apple of his eye, Cooper Vincent Sullivan; a step daughter, Heather Preston and her husband, C.J. of Delmar and their children, Elle, Rowan and Brody; a brother, George Frederick Sullivan, Jr. and wife, Barbara of Laurel; nephews, Kevin Sullivan and his wife, Nichole and their 3 children and Brian Sullivan and his wife, Megan and their child; aunts and uncles, Ruth Feeney of Laurel, Ralph and Pat Causey of Seaford and Sherman and Patti Jones of Gumboro; a sister-in-law, Dawn Hooper and her husband, Dave of Hebron and their children, Kelly Hartman and her husband, Greg and two sons, Avery and Storm, and Jamie Hartman and her husband, Chris and three children, Emma (also his texting partner), Sam and Asher; and a brother-in-law, Glen Phillips and his wife, Gail of Mardela Springs and their children, Abby Parsons and her husband John and son, Jaxon, and A.J. Phillips and his partner, Tarah Smith. He is also survived by several cousins, nieces, nephews and his best friends, Tom and Beth Lewis of Laurel and their son, Carter, his buddy. A fireman’s funeral service will be held on Thursday, May 30, 2019 at 11:00 a.m. at the Laurel Fire Department, 205 West 10th Street, Laurel, DE 19956, where a visitation for family and friends will be held from 10:00 to 11:00. Interment will follow at Laurel Hill Cemetery. Memorial contributions may be made in his memory to the Laurel Fire Department, Station 81, 205 West 10th Street, Laurel, DE 19956. Arrangements are in the care of Short Funeral Home in Delmar. Online condolences may be sent to the family by visiting www.shortfh.com.

Laurel- Barry Edward Sullivan, 61, of Laurel, passed away peacefully Sunday, May 26, 2019 at Nanticoke Memorial Hospital in Seaford, after a long and courageous battle. He was born December 10, 1957 in Milford, a son of the late G. Fred Sullivan,... View Obituary & Service Information

The family of Barry Edward Sullivan created this Life Tributes page to make it easy to share your memories.

Send flowers to the Sullivan family.