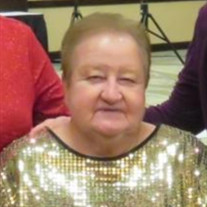 Barbara Ann Serman, 69, of Virginia Beach, VA, passed away on Saturday, February 26, 2022, at the Sentara Virginia Beach Hospital. She was born June 11, 1952, in Lancaster, California, a daughter of the late Louis and Opal (Shockey) Shepherd. She is survived by her husband of 47 years, Lester Calvin Serman, Jr.; children, Lester Patrick Serman, Virginia Beach, Carl Allen Serman, Virginia Beach, Christina Ivey Lawrence and husband Wade, Beaufort, SC and Brandi Faye Serman, Virginia Beach; grandchildren, Arianna Madison, Giovanni Adrian, Emma Faye and Olivia Ann; and many nieces and nephews. She is also survived by her two beloved dogs, “Patches” and “Missy.” In addition to her parents, she was preceded in death by siblings, Mary, Jack, Bill, Lilly Mae and Sam. Barbara was raised in California and graduated from Dinuba High School. The experiences she had in her adolescent and teen years helped shape her and she quickly became a very wise woman to her family and friends. On March 7, 1974, she happened to be in Yuma, Arizona met a young Marine named Lester Serman, who was on detachment with the squadron he was assigned to. They hit it off immediately, fell in love and were married on September 21, 1974. During their 47 years of marriage, Barbara supported Les and moved around with him through all of his military assignments. Together they lived a flavorful, colorful life. Her proudest accomplishment was taking care of her family and raising their four children. She will forever be remembered as a loving wife, mother, and grandmother. A graveside service will be held on Tuesday, March 8, 2022, at 11:00 Springhill Memory Gardens in Hebron. Wayne Mathis will officiate. Arrangements are in the care of Short Funeral Home in Delmar. Online condolences may be sent to the family by visiting www.shortfh.com.

Barbara Ann Serman, 69, of Virginia Beach, VA, passed away on Saturday, February 26, 2022, at the Sentara Virginia Beach Hospital. She was born June 11, 1952, in Lancaster, California, a daughter of the late Louis and Opal (Shockey) Shepherd. She... View Obituary & Service Information

The family of Barbara Ann Serman created this Life Tributes page to make it easy to share your memories.

Barbara Ann Serman, 69, of Virginia Beach, VA, passed away on...

Send flowers to the Serman family.