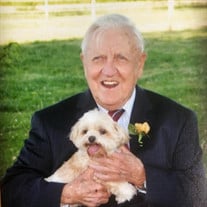 NEWARK- On Thursday, January 30, 2020, Avery Richardson Jackson, loving husband, father and grandfather, passed away at age 89. Avery was born on June 12, 1930 in his beloved Newark to the late George “Stoney” Jackson and Virginia “Emma” Elizabeth (Richardson) Jackson. He graduated from Snow Hill High School with the class of 1947 where he was revered as a talented baseball player and earned the nickname “Speedy.” His love for baseball lasted many years and he continued to play competitive softball into his 60’s. He proudly served his country in the U.S. Army during the Korean Conflict. Avery had a passion for boats and being on and around the water and in his younger years spent every day working as a commercial waterman. He was a gifted boat builder and sold his boats all over the country. For several years he applied his boat building skills by working at Chris Craft in Salisbury and then worked as a mail carrier in Snow Hill for over 20 years before retiring. He attended Bowen United Methodist Church in Newark and was a long time member of the Newark Volunteer Fire Department. Avery will be remembered for his love of old cars, eating out and taking his beloved dog “Lulu” to Arby’s and everywhere else he went. In addition to his parents, Avery was preceded in death by his beloved wife, Blanche Disharoon Jackson, who passed in 2002; a grandson, James Scott Jackson; twin great-granddaughters, Adeline Avery and Amelia Everly Tellier; and brothers, James, Robert, Monroe, George and Ebie Jackson. He is survived by sons, James Avery Disharoon Jackson (Patricia), Richard Byron Jackson (Terry) and Gregory Charles Jackson (Shelly) all of Newark; grandchildren, Beth Ann Tellier (Jared) and son Lincoln James, Blaire Leigh Jackson, Amy Jo Mulinos (Mike), Ryan Richardson Jackson, Zoe Elizabeth Jackson and Benjamin Avery Jackson; and several nieces and nephews. A funeral service will be held on Wednesday, February 5, 2020 at 11:00 a.m. Bowen United Methodist Church, 8421 Newark Road, Newark MD 21841, where family and friends may call from 10:00 a.m. to 11:00. Pastor Tina Whaley will officiate. Interment will follow in Bowen UMC Cemetery in Newark. Memorial contributions may be made in his memory to the Newark Volunteer Fire Department, P.O. Box 82, Newark, Maryland 21841. Arrangements are in the care of Short Funeral Home in Delmar.

The family of Avery R. Jackson created this Life Tributes page to make it easy to share your memories.

Send flowers to the Jackson family.