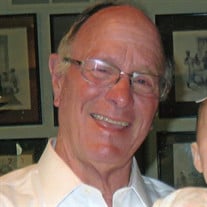 Archie B. “Chip” Brittingham, Jr., 75, of Lewes, passed away Thursday, April 18, 2019, at his home after a short, but courageous, battle with cancer. He was born on August 5, 1943, at Beebe Hospital, a son of the late Archie B. Brittingham, Sr., and Virginia Roxalyn Lodge Brittingham. Chip was a 1961 graduate of Lewes High School and completed his business education at Goldey Beacom. As a child, Chip worked at Lewes Dairy, his family’s company, in various positions. Once he graduated from Goldey, he became a major stockholder in Lewes Dairy, eventually serving as President of the company for many years. Chip was passionate about his commitment not only to the dairy but also to his community. He supported many organizations in the Lewes area for several years. He was also known on the Eastern Shore as the maker of the famous Lewes Dairy egg nog, a long-time, protected family recipe. He looked forward to making the holiday treat each year. Lewes Dairy is known not only for producing the best egg nog but also for producing the finest cream in the tri-state area. Chefs covet these products in several states. Following the transition to Hy-Point Dairy, he continued to work for Lewes Dairy at its Millsboro facility as an operations manager up until his illness. Chip had a zest for life, a love of people, a strong work ethic, a positive attitude, and a serious devotion to family. He was a fan of purple martins, music, and gardening. He was a lifelong member and supporter of Bethel United Methodist Church in Lewes, serving on many committees over the years. He was Bethel’s head usher for decades. He received the distinction of Henlopen Ruritan Club’s Business Person of the Year award as well as earning many other awards and recognitions during his lifetime. Chip enjoyed family get-togethers and could always be relied on to capture those special moments on camera. To his grandchildren, he was known as “Pop Chip.” He was also known for his smiles, genuine hugs, kindness and strong Christian faith. The Maya Angelou quote fits Chip perfectly: “People will forget what you said, people will forget what you did, but people will never forget how you made them feel.” He will truly be missed by his family, his friends, his community, and his church family. He is survived by his wife of 37 years, Joann; son, Joseph “Jody” Lodge Brittingham (Caroline) of Lewes; daughter, Lauren Brittingham Meany (Jeffrey) of Wilmington; three beautiful and adorable grandchildren, Brandon Desmond Brittingham, Claire Virginia Brittingham, and Lilia Roxalyn Meany; twin sister, Judy Bye (Michael) of Richmond, VA; brother, Robert Brittingham (Darlene) of Charleston, SC; and a dear aunt, Hazel Brittingham of Lewes. He also leaves behind a very large extended family. The family extends their deepest appreciation to Dr. Jeffrey Hawtof and Dr. Srihari Peri for the care and compassion shown to Chip. Services for Chip will be held on Saturday, April 27, 2019, at 11:00 a.m. at Bethel United Methodist Church, 129 W. 4th Street in Lewes, with a visitation from 9:00 to 11:00. Services will be conducted by The Reverends Earle N. Baker and Charles H. Wagner. In lieu of flowers, the family requests donations be sent to Bethel United Methodist Church Debt Reduction Fund, 129 W. 4th Street, Lewes, DE 19958. Arrangements are in the care of Short Funeral Home of Delmar. Online condolences may be sent to the family by visiting www.shortfh.com .

The family of Archie B. "Chip" Brittingham Jr. created this Life Tributes page to make it easy to share your memories.

Send flowers to the Brittingham family.