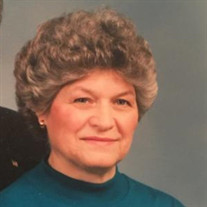 Anna L. “Polly” Gordy, 86, of Snow Hill, passed away peacefully at Delmar Villa Assisted Living on Tuesday, September 29, 2020 as she was being read the Twenty Third Psalm by a special caregiver. Anna was born on August 1, 1934 in a small farming community known as Cokesbury, located between Pocomoke and Princess Anne. There she attended school in a one room schoolhouse, grades 1-6, taught by one teacher. She remembers they practiced air raid drills beside a large banked drainage ditch, lined with trees and a small stream, they had to lie down in a rolled up “ball position.” The family later moved to Snow Hill in 1944, where she met the love of her life, her “John Wayne,” Paul Dennis Gordy. After graduation in 1952 from Snow Hill High School, she and Paul married on September 14, 1953 and later became devoted parents to their two children. She worked at Wilson’s Plumbing and eventually began her forty year banking career at County Trust which then became Maryland National Bank which was later acquired by Calvin B. Taylor Banking Company. She retired from Calvin B. Taylor in 1996. She later worked part time for Furnace Town for ten years. She was a member of Bates Methodist Church, where she counted Sunday collections, worked at the church Good Samaritan Shop, fundraisers and bake sales. She was a member of the American Legion Post 67 Auxiliary where she “manned” the bake table. She and Paul were members of a small senior motorcycle gang comprised of family and good friends and they enjoyed many road trips and good times together. Fondly known by most as Polly or Aunt Polly, she loved her family and always reminded her children how important it was to visit and stay in touch. She loved hosting the annual family reunion and her homemade chocolate ice cream and sponge cake she and Paul were famous for was enjoyed by all. She is survived by her daughter, Patricia G. Barbely and her husband, James C. of Newark, MD; a son, Paul Dennis Gordy, Jr. and his wife Michelle of Salisbury; grandchildren, James Robert Barbely, John Adam Barbely, and Devin Phillips; great grandchild, Kayla Belle (Eck) Barbely; siblings, Norman Adkins of Salisbury, Carolyn Adkins, Esther Smith and Laura “Sis” Taylor, all of Snow Hill; and several nieces and nephews. She was preceded in death by her parents, John Adkins and Lillie Carter Adkins; her loving husband of 57 years, Paul D. Gordy, Sr.; and siblings, Lloyd, John, and James Adkins, Aline Wilmer, and Ruth Guthrie. A funeral service will be held at Spence Church Family Center, 4824 Paw Paw Creek Road in Snow Hill on Wednesday, October 7, 2020 at 11:00 a.m. A visitation for family and friends will be held one hour prior to the service. Due to current gathering restrictions, masks and social distancing are required. The Reverend Dr. Joseph Barth and Pastor Ken Elligson will officiate. Interment will follow in Bates Memorial Cemetery in Snow Hill. In memory of Mrs. Gordy, contributions may be sent to Bates Memorial United Methodist Church, 102 East Market Street, Snow Hill, MD 21863. Arrangements are in the care of Short Funeral Home in Delmar. Online condolences may be sent to the family by visiting www.shortfh.com

The family of Anna L. "Polly" Gordy created this Life Tributes page to make it easy to share your memories.

Send flowers to the Gordy family.