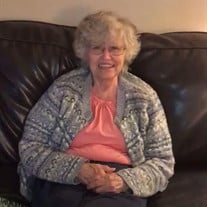 SALISBURY- Alice Louise Cook, 75, of Salisbury, died Friday, October 20, 2017 at Golden Gardens Assisted Living in Parsonsburg, where she had happily lived for the past year. She was born July 20, 1942 in Indianola, Iowa, a daughter of the late Thomas and Evelyn (Abrahamson) McCormick. She was raised on a farm in Iowa and some of her favorite childhood memories revolved around the 4-H and her cow, “Beauty”, which won her the “Jersey Queen” title at the Iowa State Fair. She loved being a part of the high school honor guard where she met lifelong friends. Education was her passion and at age 60 she earned her Master of Arts in the field of English from Bowling Green University, with a specialization in teaching English as a second language. She lived to serve people and was active in Baptist churches wherever they lived. She enjoyed teaching Sunday School and mentoring the youth through Girls Brigade and AWANA and was an avid reader. Alice and her husband, Bill, spent much of their time, effort and finances to follow their hearts and God’s path, spreading kindness, love and compassion to people in many areas of the world. She will be remembered as a loving wife, mother, grandmother, great-grandmother and sister. She is survived by a son, Kerry Dean Gray of Missouri; two daughters, Shelly Lynette Gray of Mississippi, and Melody Moore and her husband Jeff of Delmar; grandchildren, Kelsey, Noelle, Randy, Danny, T.J., Tyler, Karli, Kali, Carlos, Angela, Katelyn, Jacob, Joshua, Rebekah, and Austin; great grandchildren, Thomas, Tucker, Sophia, Chloe, Ryan, Abigail ,Ayden, Van, Charlie and Dannie; sisters, Florence, Marilyn, Kathy and Edith; brothers, Dwaine and Dwight; and many nieces and nephews. In addition to her parents, she was preceded in death by her husband, William T. Cook, who passed in 2015; an infant daughter, Sherry; sisters, Harriett and Linda; and a sister-in-law, Joyce. A memorial service will be held at 7:00 p.m. on Wednesday, October 25, 2017 at the Short Funeral Home, 13 E. Grove Street in Delmar. The Reverend Howard Travers will officiate. Memorial contributions may be made in her memory to Coastal Hospice, P.O. Box 1733, Salisbury, MD 21802. Arrangements are in the care of Short Funeral Home. Online condolences may be sent to the family by visiting www.shortfh.com.

SALISBURY- Alice Louise Cook, 75, of Salisbury, died Friday, October 20, 2017 at Golden Gardens Assisted Living in Parsonsburg, where she had happily lived for the past year. She was born July 20, 1942 in Indianola, Iowa, a daughter of the late... View Obituary & Service Information

The family of Alice Louise Cook created this Life Tributes page to make it easy to share your memories.

Send flowers to the Cook family.